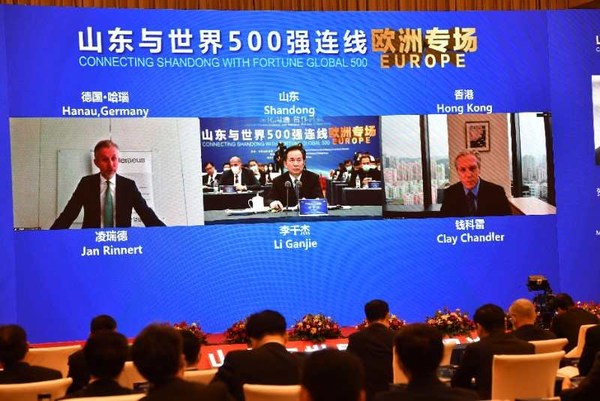 JINAN, China, Aug. 31, 2020 /PRNewswire/ — The “Connecting Shandong with Fortune Global 500” series of events, hosted by the CPC Shandong Provincial Committee and Shandong Provincial People’s Government, organized by the Department of Commerce of Shandong Province, and sponsored by FORTUNE CHINA, were held in Shandong province’s capital of Jinan, on August 27. At the day’s first event, contracts for 10 major foreign-invested projects worth US$797 million in the aggregate were signed, covering high-end equipment manufacturing, new materials, modern finance, biotechnology, food manufacturing and chemicals.

Shandong provincial governor and CPC Shandong Provincial Committee deputy secretary Li Ganjie engaged in videoconference calls with a number of executives from Fortune Global 500 companies, during which he focused the discussion on Shandong’s unique advantages: the province’s strategic platform, the well-established end-to-end industry chains, the rapidly developing synergies between the province’s many traditional and emerging industries, the benefits accrued to companies as a result of business-friendly government policies, the market potential and an environment that is primed for growth. He said Shandong’s government is committed to continuously enhancing the political, social, market, and natural ecological environments, in an effort to create a market-oriented, rule of law-based system that welcomes cooperation with international entities, providing a guarantee for foreign investors who are interested in investing and in developing a business in the province at their own pace.

In the video call with Ivan Glasenberg, CEO of Switzerland-based Glencore, Li said Glencore already had extensive and close trade partnerships with many companies throughout Shandong province in the domains of crude oil, natural gas, minerals and agricultural products. He welcomed Glencore to deepen its cooperation with Shandong Energy, Shandong Weiqiao Pioneering Group, Xinfa Group and Shandong Iron and Steel in terms of bulk commodity trade, and invited other strategic partners such as international oil producers and traders to invest in the China Shandong Pilot Free Trade Zone.

Sanjiv Lamba, executive vice president and Asia-Pacific CEO of Linde Group, the world’s largest supplier of industrial gases, said he is optimistic about Shandong’s business prospects. He said the group plans to invest between US$1 billion and US$1.3 billion in Shandong, as well as to provide the province with comprehensive hydrogen-based solutions.

Fabrice Fourcade, Ã‰lectricitÃ© De France vice president and president for Greater China, said that as a leader in the field of renewable energy, the group looks forward to having more opportunities to support Shandong’s sustainable development and reduce the province’s air pollution.

On the day of the event, forums for discussions and exchanges took place in Jinan, Qingdao, Yantai, Weifang and Jining, providing venues for businesses across the province to contact and engage in talks with European-based Fortune Global 500 companies.

On the one hand, European multinationals, led by Fortune Global 500 companies, have been expanding their presence in Shandong, empowering innovation in terms of technology enhancements and transformation across industries. On the other hand, the province has been constantly optimizing the business environment, in a move to facilitate European businesses’ access to investment opportunities.