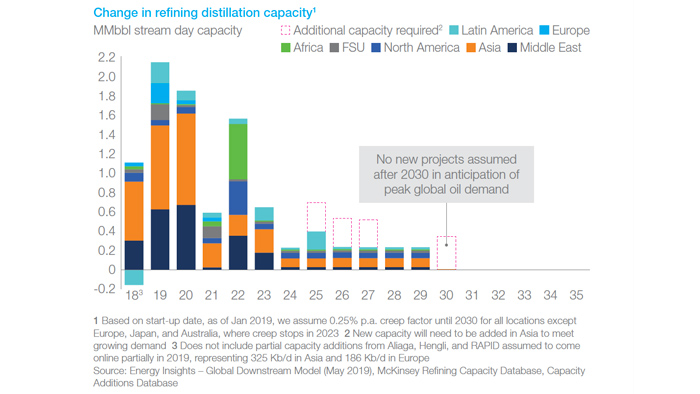 More global oil refining capacity is slated to be added in the near term, which will lead capacity to continue to outpace demand growth, according to McKinsey & Company’s recently released report entitled Global Downstream Outlook to 2025. Refining distillation capacity will grow by 1.2% per annum in the next four to five years, adding almost seven million barrels per day (MMb/d) of capacity. The majority of these additions to refining capacity are set to occur in Asia and the Middle East.

Last year, 950 thousand barrels per day (Kb/d) of capacity was added globally versus 835 Kb/d in 2017. Asia was the largest contributor of capacity growth, with more than 600 Kb/d added in 2018, largely from expansion projects in China and India and Vietnam’s new Nghi Son 200 Kb/d refinery. The Middle East had more than 300 Kb/d of additions, most of which came from two 120-Kb/d condensate splitters at Iran’s Bandar Abbas refinery.

While Asia’s long-term outlook remains strong, its utilization rates will dip to 73% by 2023. After 2023, growing demand will lead Asia’s utilization to steadily increase to more than 80% by 2026 and higher after that.

Growth in global oil demand is projected to slow to 0.5% per annum from 2018 to 2035, compared to 1.2% per annum in the last three decades, the report added. The decline in oil demand will mostly be driven by road transport and power, whereas aviation and chemicals will be the main sources of long-term demand growth.

“In the long term, we forecast an earlier peak in oil demand by the early 2030s compared to other forecasts. This is primarily due to a more bearish outlook for road transport demand due to growing penetration of electric vehicles,” the global consulting firm said. 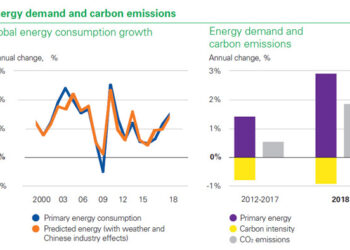 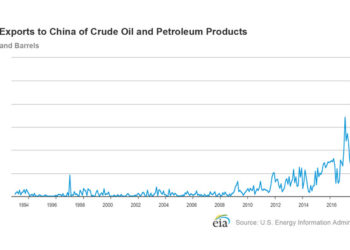