Quaker Chemical Corporation and Houghton International have combined to create Quaker Houghton (NYSE: KWR), the global leader in industrial process fluids to the primary metals and metalworking markets. Along with the new name, the company revealed a new logo and brand representing the combined companies. The company will continue to be listed on the New York Stock Exchange and trade under the “KWR” ticker symbol. Quaker Houghton is headquartered in Conshohocken, Pennsylvania, located near Philadelphia in the United States.

Quaker Chemical was founded in 1918 and Houghton International in 1865.

“We are rooted in companies commonly acknowledged as authorities in industrial fluids and valued experts in customer processes,” said Michael F. Barry, chairman, CEO, and president of the new company. Barry, who previously served Quaker Chemical in similar capacities, went on to say, “Our similar cultures and values, combined with the talent and resources we bring to Quaker Houghton, create exciting opportunities to deliver innovative solutions that will help our customers’ operations run even more efficiently and effectively.”

The company’s combined breadth of product and service offerings can be found in end-markets such as aerospace, aluminum, automotive, machinery, can manufacturing, industrial parts manufacturing, mining, offshore, steel, and tube and pipe industries.

The combination of Quaker Chemical and Houghton International nearly doubles the size of either company with trailing 12-month revenues as of June 30, 2019, of USD1.6 billion.

In addition to cost synergies, the company expects that its growth strategy will create additional value over time. Revenue-based synergies, such as cross-selling, will be an important contributor to growth going forward. The legacy product portfolios of both Quaker and Houghton can now be offered to the combined, complementary customer base, where 14,000 of the 15,000 total customers are unique to one company or the other. The company believes the revenue synergies are achievable and will be significant over time, beginning after year one. In the first year, the company’s focus will be to maintain service levels for its customers and ensure no supply chain disruptions, while successfully executing its integration plans. In year two, the revenue synergies will begin to be visible as the company expects to grow above the market by 2% to 4% as it has in the past.

The company also expects to continue to grow through acquisitions which remain part of its core growth strategy. In the short term, the company will focus on paying down debt but will continue to consider smaller acquisitions that can create value.

To fund the purchase, the company borrowed a total of USD930 million at close under its new USD1.15 billion credit facility.

The company estimates that its annual interest expense at today’s interest rates, including the cost to convert a portion of the term loan to a fixed rate as required by the lenders, will be in the range of 3.4-3.6%.

In addition to Barry, Quaker Houghton’s management includes existing leaders from both legacy companies. The newly formed executive leadership team is comprised of:

Quaker Houghton now has an 11-member Board of Directors, consisting of the eight directors from Quaker Chemical and three directors nominated by the Hinduja Group. The three new independent directors of Quaker Houghton are the following former Board members of Houghton International: 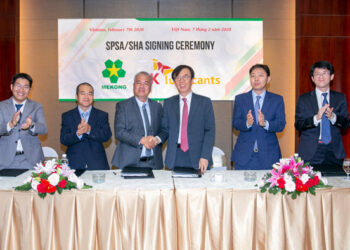