BP has agreed to form a 50-50 joint venture with Bunge – a leader in agriculture, food and ingredients – that will create a leading bioenergy company in one of the world’s largest fast-growing markets for biofuels.

BP will combine its Brazilian biofuels and biopower businesses with that of Bunge to create a world-scale, highly-efficient producer of sugarcane ethanol in Brazil, BP Bunge Bioenergia. BP’s interest in the new venture will grow its existing biofuels business by more than 50%.

Ethanol produced from sugarcane is one of the most carbon-efficient biofuels available globally, with lifecycle greenhouse gas emissions around 70% lower than conventional hydrocarbon transport fuels. Brazil is the world’s second largest and most integrated market for ethanol as a transportation fuel with demand forecast to grow rapidly. The majority of vehicles in the country – around 70% – are already able to run on ethanol and the country’s demand for ethanol is estimated to increase by around 70% by 2030.

“This is another large-scale example of BP’s commitment to play a leading role in a rapid transition to a low carbon future. Biofuels will be an essential part of delivering the energy transition and Brazil is leading the way in showing how they can be used at scale, reducing emissions from transport. This combination will unlock new possibilities for improved efficiency and future growth in this key market,” said Bob Dudley, BP group chief executive.

“This joint venture with BP, one of the world’s leading energy companies, represents a major portfolio optimization milestone for Bunge. We are proud of what our team has done to evolve our sugar and bioenergy business as an industry leader. I am confident that this team, and the strong commitment from a global leader such as BP, will create even greater shareholder value,” said Gregory A. Heckman, Bunge’s chief executive officer.

BP Bunge Bioenergia will have 11 biofuels sites in Brazil. With 32 million metric tonnes of combined crushing capacity per year, the joint venture will have the flexibility to produce a mix of ethanol and sugar. It will also generate renewable electricity – fuelled by waste biomass from the sugar cane – through its cogeneration facilities to power all its sites and sell surplus electricity to the Brazilian power grid. BP and Bunge’s assets are largely complementary, with sites in five Brazilian states including three in the key region of São Paulo.

In 2018, the two businesses produced a total of around 2.2 billion litres of ethanol equivalent and, after powering the sites, exported 1,200 gigawatt-hours of low-carbon biopower to the national grid. Together the two businesses currently employ over 10,000 people in Brazil.

The combined business will be ranked the second-largest player in the sugar cane ethanol biofuel industry in Brazil by effective crushing capacity.

Under their agreement, BP and Bunge will each contribute their existing Brazilian biofuel, biopower and sugar businesses into the new, equally-owned, standalone joint venture. On completion, BP will pay Bunge USD75 million, subject to customary closing adjustments, and the joint venture will assume USD700 million of non-recourse debt associated with Bunge’s assets.

Subject to satisfaction of conditions precedent, including obtaining the necessary regulatory clearances and approval, the deal is expected to complete in the fourth quarter of 2019.

Following completion, the aim is for BP Bunge Bioenergia to generate significant operational and financial synergies, through scale efficiencies and by applying best practices, optimised technologies and operational capabilities across all the assets of the new business.

The new business is expected to be headquartered in São Paulo. Mario Lindenhayn from BP will be executive chairman, Geovane Consul from Bunge, chief executive, and Marcus Schlosser from BP, chief financial officer. BP and Bunge will have equal representation on the board of directors.

In 2018 the Brazilian production of ethanol was some 26 billion litres, produced almost entirely from sugarcane grown in-country. The Brazilian government is introducing a new low carbon transport policy, known as RenovaBio, to establish the first regulated carbon credits market in the country. RenovaBio is expected to encourage continued growth in the market and support the development of the sugarcane ethanol industry.

The agreement includes only the Brazilian ethanol, sugar and biopower businesses of BP and Bunge. It excludes, for example, BP’s interests in its Butamax joint venture or Bunge’s interests in corn ethanol assets outside Brazil. 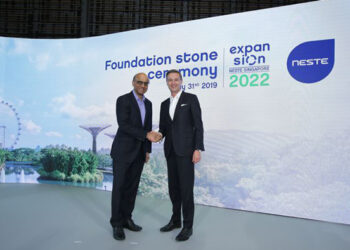